Contrary to the current rhetoric, Obamacare was not in fact America’s first foray into socialized medicine, and it did not represent the kind of crossed Rubicon that Republicans like to accuse it of being. The door had first been opened in the Second World War, when government imposed wage controls that gave incentives to employers to bundle health insurance into compensation packages. When the government then made employer-provided insurance tax-deductible, such plans became the norm. But the government really charged into the market in 1965, with the creation of Medicare and Medicaid. For years, Republicans have twisted themselves into logic pretzels in order to argue that Obamacare is socialism while Medicare is not.

In granting a new entitlement, Obamacare did nothing to address problems that have plagued the U.S. health-care system. It did not encourage competition among insurers, it demanded a “one size fits all” approach to coverage, and, most egregiously, did nothing to contain the rising medical costs that threaten to bankrupt the U.S. To add insult to injury, it required people to buy insurance they didn’t want.

Ulysses S. Grant on the Civil War and slavery

If I thought this war was to abolish slavery, I would resign my commission and offer my sword to the other side.

Meanwhile, during half a century, reactionary influences from Europe have been shifting American thinking onto a basis of socialistic assumptions. In cities and states, both parties began to socialize America with imitations of the Kaiser’s Germany: social welfare laws, labor laws, wage-and-hour laws, citizens’ pension laws, and so-called public ownership.

Eleven years ago this creeping socialism sprang up armed with Federal power, and Americans—suddenly, it seemed—confronted for the first time in their lives a real political question: the choice between American individualism and European national socialism.

Will an American defend the Constitutional law that divides, restricts, limits and weakens political-police power, and thus protects every citizen’s personal freedom, his human rights, his exercise of those rights in a free, productive, capitalist economy and a free society?

Or will he permit the political structure of these United States to be replaced by a socialist state, with its centralized, unrestricted police power regimenting individuals into classes, suppressing individual liberty, sacrificing human rights to an imagined “common good,” and substituting for civil laws the edicts, or “directives,” once accurately called tyranny and now called administrative law?

This is the choice that every American must make. There is no escape from this choice; the present situation puts it before us and requires a decision.

Rose Wilder Lane: Can individualism survive in the U.S.?

There is nothing new in planned and controlled economy. Human beings have lived under various forms of that social security for six thousand years. The new thing is the anarchy of individualism, which has been operating freely only in this country for a century and a half.

When I first wrote this book ten years ago, I asked myself whether individualism has enough social vitality to survive in a world turning back to the essentially medieval, static forms. Can individualism, which by its very nature has no organization and no leader, stand against the determined attack of a small group, organized, controlled, and fanatically sure that a strong man in power can give a people better lives than they can create for themselves?

The spirit of individualism is still here. There are some 130,000,000 human beings in these United States, and not one of us has escaped anxiety, and very few of us have not been forced to reduce our standard of living during these past few years. The number of us who have been out of work and facing actual hunger is not known; the largest estimate has been twelve million. Of this number, barely a third appeared on the reported relief rolls. Somewhere those millions in need of help, who were not helped, are still fighting through this depression on their own.

Millions of farmers are still lords on their own land; they are not receiving checks from the public funds to which they contribute their increasing taxes.

Millions of men and women have quietly been paying debts from which they asked no release; millions have cut expenses to the barest necessities, spending every dime in fear that soon they will have nothing, and somehow being cheerful in the daytime and finding God knows what strength or weakness in themselves during the black nights.

Americans are still paying the price of individual liberty, which is individual responsibility and insecurity.

Rose Wilder Lane: "Is personal freedom worth the effort?"

The question is whether personal freedom is worth the terrible effort, the never-lifted burden, and the risks, the unavoidable risks, of self-reliance.

For each of us, the answer to that question is a personal one.  But the final answer cannot be personal, for individual freedom of choice and of action cannot long exist except among multitudes of individuals who choose it and who are willing to to pay for it.

Bill Laggner on a 20-something real estate speculator from Toronto

On a recent NY trip my Uber ride into the city was shared with Lola, a visitor from Toronto.  Our conversation began with why we were visiting the city and her interest in real estate, specifically Toronto where she was an investor in condos along with her brother.  They owned multiple condos, all of which were financed with little or nothing down.  This of course prompted several questions about prices, location and whether or not she was nearing a "flip" of her rented merchandise.  At this point, 20-something Lola looked at me with disdain and the following response:

"Why would I flip the condos when my brother and I have made several million dollars each and lenders are lined up to lend us more money to but into a project next door?  And the project next door will be incredible because my friend, Drake (rap "artist"), is going to get involved in marketing the project."

After listening to Lola I suggested she read a bit about the US housing bubble circa '05-'08 or take a shortcut and watch The Big Short.  In fact, I emphasized that our firm was one of the most outspoken critics of the central banking inflated housing bubble while profiting from the inevitable demise.  Continuing the conversation about leverage and how it seduces many on the way up while destroying many on the way down it was clear that Lola wasn't interested in my advice.  It reminded me of my trip to southern California in '06, months before the crash in real estate unfolded.

It was my worst nightmare coming true. Nobody really knew what was going on in the market.  The toxic assets of many of our biggest banks are OTC derivatives and caused the economic downturn that made us lose our savings, lose our jobs, lose our homes.  It was very frightening.

What would U.S. stocks do if President Trump suddenly resigned? Based on recent price action, the answer is clear: Rally 3-5%, at least, over a day or two. U.S. equities see through the headlines (like the Comey firing) and essentially believe two things. First, corporate earnings are growing nicely. Second, the Republican-led Congress needs to pass tax reform by the 2018 midterm elections.

Jeremy Siegel: the Dow would rally 1,000 points if Trump resigned

If Donald Trump resigned tomorrow, I think the Dow would go up 1,000 points.

One has to remember that the rally since Trump’s election has been based not on Trump’s agenda [but] on the Republican agenda. I would say that 90% of the people, investors on Wall Street, and most of the CEOs, would prefer a President Michael Pence, rather than Donald Trump. So, in a way you know what kind a trouble he’d be, might he have to resign, might he be impeached... all that does not derail the Republican agenda, upon which this rally was based.

I don't see anything but a steady rise. 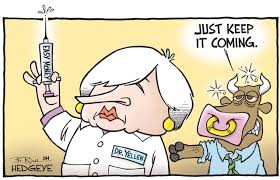 Posted by Kevin Duffy at 2:01 PM No comments: