In school, you're taught a lesson and then given a test.  In life, you're given a test that teaches you a lesson.

No one accuses [President Eisenhower] of being a Red or even a socialist.  On the contrary, the one great remaining dream of his life seems to be to lead a host against the Red legions all over the world - as if Communism, which is a social disease, could be whipped by armies.  The President does not seem to realize that militarism is a social disease and that it was the effort of the old Germany and France and Italy to bolster their economic systems by militarism supported by government debt that brought all these countries to the brink of bankruptcy in 1914, and then into war to escape the insoluble problems they had created by their folly.  He does not seem to know that militarism bankrupted Germany, France, and Italy twice in fifty years.

~ John T. Flynn, "Our Phoney War on Communism," The American Mercury, February 1954
Posted by Kevin Duffy at 6:34 PM No comments:

In the broadest sense possible, the greatest and most fundamental risk is the risk of not knowing what you're doing.  To the extent these "risk models" trick "risk managers" into thinking they do, they are dangerous because they blind users to the true nature of risk.  The paradoxical outcome is that such risk managers are making the financial world much riskier than it would otherwise be.

Gnanasekar Thiagarajan: "You can’t be too bearish on gold"

You can’t be too bearish on gold. 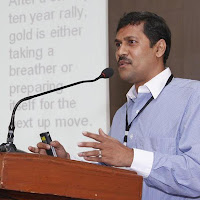 Adam Klopfenstein: "I don't see why anyone should buy gold"

When equities are going up and making new highs on the year, I don't see why anyone should buy gold.

David Seaburg: "Very hard to make a fundamental case to be long gold"

Long-term I think it's very hard to make a clear fundamental case on why you should be long gold.  I don't think fundamentally the backdrop is that strong.  You've got weak demand coming out of India, China.  You've got the dollar; it's been in one direction straight up.  You've got deflationary fears on the horizon.

Thomas Sowell on the cause of great tragedies of history