Jordan Peterson on Cambodian socialism in the late 1970s

Marxist ideas were very attractive to intellectual utopians. One of the primary architects of the horrors of the Khmer Rouge, Khieu Samphan, received a doctorate at the Sorbonne before he became the nominal head of Cambodia in the mid-1970s. In his doctoral thesis, written in 1959, he argued that the work done by non-farmers in Cambodia's cities was unproductive: bankers, bureaucrats and businessmen added nothing to society. Instead, they parasitized the genuine value produced through agriculture, small industry and craft. Samphan's ideas were favourably looked upon by the French intellectuals who granted him his Ph.D. Back in Cambodia, he was provided with the opportunity to put his theories into practice. The Khmer Rouge evacuated Cambodia's cities, drove all the inhabitants into the countryside, closed the banks, banned the use of currency, and destroyed all the markets. A quarter of the Cambodian population were worked to death in the countryside, in the killing fields.

~ Jordan B. Peterson, 12 Rules for Life: An antidote to chaos 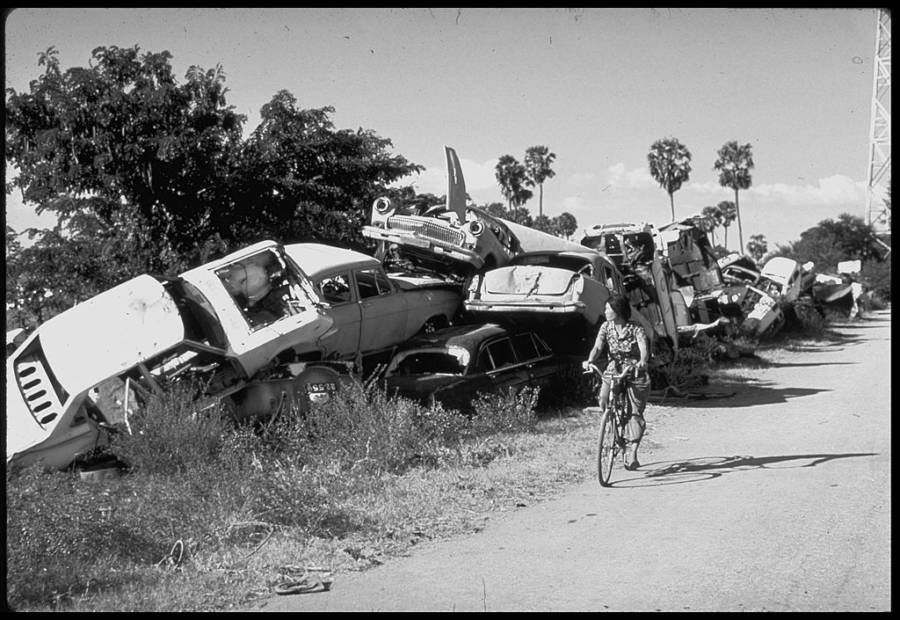 A woman rides a bicycle by a stack of destroyed cars, cast aside by the Khmer Rouge as a symbol of the bourgeoisie.

Posted by Kevin Duffy at 8:47 AM No comments:

Joseph Salerno on the two classes in the economy

There are only two classes in the economy, and that is, the people who live off their production and exchange, which is voluntary and those that then are parasitic and suck away all of the income and wealth that is produced by people who exchange and live voluntarily.

Alvin Toffler on Microsoft and the antitrust suit

I have mixed feelings on Microsoft.  I believe that antitrust suit or no antitrust suit, no monopoly lasts forever.  Technological change will produce challengers to Microsoft just as it has produced challengers to every leading company.  That doesn't mean Microsoft goes up in smoke.  But I think it cannot maintain the degree of power that it has indefinitely, and that is without the lawsuit.

Adolph Hitler on the big lie

[I]n the big lie there is always a certain force of credibility; because the broad masses of a nation are always more easily corrupted in the deeper strata of their emotional nature than consciously or voluntarily; and thus in the primitive simplicity of their minds they more readily fall victims to the big lie than the small lie; since they themselves often tell small lies in little matters but would be ashamed to resort to large-scale falsehoods.  It would never come into their heads to fabricate colossal untruths, and they would not believe that others could have the impudence to distort the truth so infamously.  Even though the facts which prove this to be so may be brought clearly to their minds, they will still doubt and waver and will continue to think that there may be some other explanation.

Posted by Kevin Duffy at 6:13 PM No comments:

As Austrians, we firmly believe that the credit cycle IS the business cycle and that - to draw upon Hayek - crises start out as monetary ones and later morph into real ones.  We frequently tell anyone who will listed that there are NO soft landings - sometimes adding Mises' pragmatical advice that to try to remedy any sizeable inflation through a deliberate act of contraction (rather than by simply desisting from making matters worse and allowing the system to repair itself) is to 'reverse the car back over the pedestrian one has just knocked down.'

~ Winston Churchill
Posted by Kevin Duffy at 6:37 PM No comments:

He whose life has a why can bear almost any how.

~ Friedrich Nietzche
Posted by Kevin Duffy at 11:22 AM No comments:

Tom Bernhardt on the difference between monarchy and democracy

~ Tom Bernhardt
Posted by Kevin Duffy at 9:57 AM No comments: