Alan Greenspan on the China bubble

There are significant bubbles in Shanghai and along the coastal provinces, but there’s some of that going back into the hinterlands as well. Remember that the bursting of the bubble by itself is not a big catastrophe. We had a dot-com bubble, it burst, and the economy barely moved.

~ Alan Greenspan, "Greenspan Calls Treasury Yields ‘Canary in the Mine'," Bloomberg.com, March 26, 2010
Posted by Kevin Duffy at 12:30 PM No comments:

Ken Fisher on Phase 2 of the bull market

It's a year since the bull market began, and I remain firmly bullish...

One year into the current bull market I like what I see: globally improving fundamentals plus strong societal skepticism. Snarky, cranky sentiment and better fundamentals are the classic ingredients of the second phase of bull markets.

Economic numbers globally and almost consistently keep coming in up and better than expected, while being largely dismissed in terms of significance. In part this is because the fastest recoveries from the recession are happening in the 25% of global GDP found in emerging markets countries. Maybe it's unnerving that China and Brazil are leading us. Americans are way too U.S.-focused.

My Feb. 8 column cited the "pessimism of disbelief," the tendency to see all news as bad, or, if good, as something likely to morph into something bad. (Typical formulation: Stimulus efforts either won't work or will cause inflation.) You can see this pessimism in mutual fund flows: For three years there has been a migration into bond funds--mostly into government bonds for safety--just in time for long-term U.S. government bond funds to return a --17.5% in 2009. That's fear.

For more on market sentiment, visit market blogs anywhere. The skepticism is wise-guy thick. Anyone posts something positive and they get pounded by the wiseacres. I love it. This is the wall of worry bull markets classically climb.

Howard Glaser on the housing market

The housing market is the Vietnam War of the American financial system. The federal government is in so deep, they have to keep ramping up to find a way out. We’re going to have to destroy all these mortgages in order to save them.

If you are going to be a great investor, you have to fit the style to who you are. At one point I recognized that Warren Buffett, though he had every advantage in learning from Ben Graham, did not copy Ben Graham, but rather set out on his own path, and ran money his way, by his own rules.… I also immediately internalized the idea that no school could teach someone how to be a great investor. If it were true, it’d be the most popular school in the world, with an impossibly high tuition. So it must not be true.

I wouldn't be surprised if it's not that big of a deal. 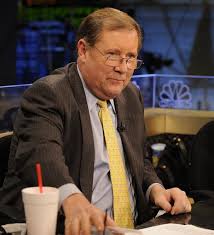 Posted by Kevin Duffy at 9:14 AM No comments:

Every normal man must be tempted, at times, to spit on his hands, hoist the black flag, and begin slitting throats.

Dylan Ratigan on US financial system

While many Americans and many in our government would love for you to believe that the financial crisis and the transfer of wealth in this country was an accident, this report comes just short of suggesting this is by no means an accident, but instead one of the greatest crimes ever perpetrated against a group of people. This crime: an accounting fraud perpetrated by bank CEOs against the American taxpayer and enabled by the US government.

"Some things happen to you that at the time will make you feel like the world is coming to an end, but in actuality, there is a very good reason for it. You just can't see it and don't know it. When one door closes, another will open, but standing in the hallway can be hell. You just have to persevere. Quite often that dragon of failure is really chasing you off the wrong road on to the right one."

Greece crisis over, rest of the region safe

For Greece, the problem is completely over. I don’t see any other case now in Europe. I don’t think there is any reason to think the euro system will collapse or will suffer greatly because of Greece.

Kevin Duffy on investing and opportunity

Investment management is simply capturing the arbitrage available between perception and reality. It is paramount to know both. The good news: the gap between the two has never been greater.